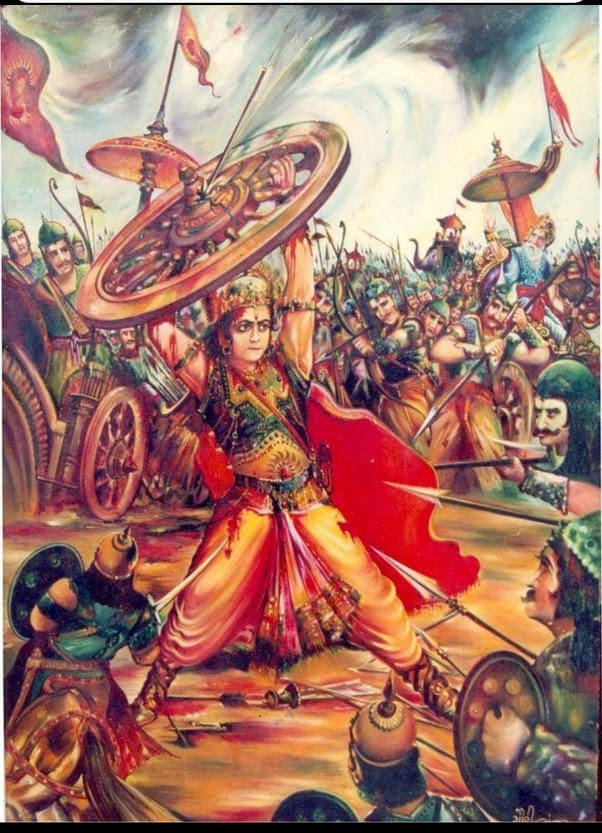 Krishna didn’t want to look at them.Two teenagers in love, eyes full of dreams and promises.Abhimanyu was talking to Uttara, his wife. They had got married six month back.

Abhimanyu was in hurry, trying to move away,Uttara looked strained, gripping his shirt, but her fingers were too weak.  For a boy, who had completed his sixteen summers just few days back, these were uncomforting moments.

His fingertip gently wiped away a tear that had escaped down Uttara’s cheek and he tried to say goodbye. He remembered his mother once telling him  that morning tears were a bad omen.

She only looked away for a moment trying to be strong, and the mask slipped, her breaths became shallower. She was fading out.

Sun was rising with weird radiance, presaging some tragedy. Krishna set his eyes at a distance .

Sometimes it is a curse knowing things. Even for Gods! And today was one such day.

I looked for God in the sky, but He was not there.

Or I was not able to see him in the skies enveloped in clouds of dust .Sandy soils of Kurukshetra, thousands of chariots & millions of war-horses ,the dust makes everything invisible –sun ,sky as well as God if any.

Bleeding had stopped and I was shivering slightly, the blood in the puddle around me was getting colder, no further fluid was trickling –fluid of fresh and warm blood that could balance the temperature.

It was my day at the war today, I fought bravely. I broke the chakrvyuh that no-one else could, I killed more than ten thousand men of Kaurva army.I made Karna to retreat twice by gravely injuring him. I killed Duryodhana’s son, my cousin Lakshman when there was a do–or-die duel between us but I was never the one to begin a fight, I always waited for the first arrow to be shot at me.

I’m a game changer .My death in next few minutes will be the turning point of this war.

We were losing the war, our strength was much lower. Almost 12 days have gone, but my father Arjuna had been  a reluctant warrior till now, still not convinced in his heart to go with full force against Drona ,his guru and his cousin brothers. The war was going on a slow pace, with limited supplies of food it was difficult to stand for long time against a king’s army.

I’ve changed the game, I will be the first person to be killed by enemy in an unethical manner. Six warriors surrounded me ! Karna broke my bow by attacking me from behind, Drona killed my horses and Kripacharya slaughtered my sarthy. And when I was defenseless ,they shot me with hundreds of arrows. It is the vilest crime committed in this war till now, Kaurvas have breached the code and ethics of the war.

I will be the first person from Pandvas’ family to die. Hope my father will realize the reality of the war now !Hope now my people will retaliate with all their full might & fury, holding back nothing.

What about me? I will be known as a legend! A warrior who knew how to enter the chakrvyuh but was never told how to get out. I knew my death was certain.

But why I chose this path? A path that will take me away from my young wife, from a yet to be born son ,from all the promises of life.

One day my mother sat me down and explained that I couldn’t become a legend ,there were already many around-Arjuna, Bheema, Karna, Drona and many more. I’d been born in the wrong times, and I felt cheated and I started crying.

Krishna, my maternal uncle, was there .He consoled me, he had said,” All man are the same except for their belief in their own selves, regardless of what others may think of them. The only person you are destined to become is the person you decide to be. Being anyone on this earth is a matter of choice, not chance.”

Being anyone on this earth is a choice– I remembered that when uncle Yudhishtera came to me with a request today’s  morning.

Kaurvas had formed a charavyuh-a phalanx of spinning wheel. All  Kaurva soldiers had worn  red uniforms that day and were constantly moving in rings over rings, melting and perishing Pandva soldiers in this constantly turning maze.The vyuh was not visible from ground but to the gods above could see everything .It looked like a red lotus – petals formed by red attires and fresh blood  – a bloody lotus. 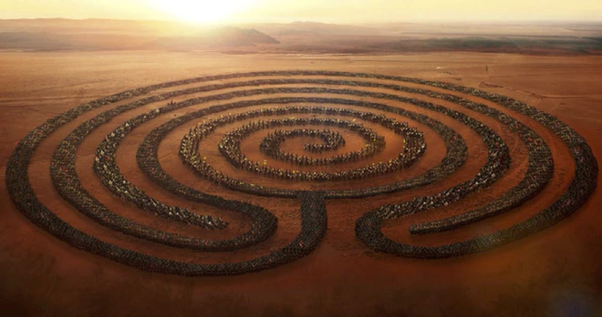 Uncle Yudhishtra was in despair, the lotus was consuming thousands of our soldiers. Only two people knew the secret of breaching this wheel. My father Arjuna and myself. I had learned it while I was in my mother’s womb,had  heard if from my father while he was telling my mother about it.

Uncle pleaded me to take the lead. I told him that I knew how to enter but didn’t know how to come out of it but father could not tell the exit plan as my mother had slept by that time.

He promised that rest of Pandva warriors including him,will follow me in this wheel of death once I enter it and then we all  will destroy it from with-in.

I had said yes.

Was there an option ? For me this was a god-given opportunity – to be someone of my own choice.To prove my mother wrong who had said that I was born in wrong times and to stand out among multitude of warriors , to become a legend was not my destiny.

Uncle was looking very excited when I had nodded, he left hurriedly after asking me to get ready.

I had laughed inside. The only way to get through life is to laugh your way through it. When there’s only one road to choose, you can either laugh or cry. I preferred to laugh.

I remembered what I had always felt. My life had been a cruel joke, I was born for this day only to die in this trap, this vyuh.

The trap was laid even before I was born, in my mother’s womb. I learnt my way in the chakravyuh there, but not the way-out. I had cried, shouted, kicked my mother’s womb, but she won’t wake up and my father stopped short of telling about the maneuvers of exiting. That’s why they say that you should dance like there’s nobody watching and you should sing like no one is listening. If my father would have kept singing ,I would not be lying here.

And Krishna? I had not seen you since the war started,but today morning you came to say hello ! You said you love me. You knew it ! A smile on the face but with disappointment in eyes , I could sense it.

Being a God has never been easy ,whatever the yuga.

Like may others,I knew I was born as a sacrificial lamb for gods. For  gods who claim to come back as saviors of mankind in every yuga.

For those gods ,a war like this is a yagna .A yagna in the name of dharma.

A yagna where pointless sacrifices are made . Young sons, dotting but strict fathers ,over-protective brothers and courting husbands are the  offerings to the sacred fire of this yagna. Wails of widows ,sobbing of mothers and cries of orphans are  the sounds of the verses being chanted for cleansing the world from sinners. Soul lives forever , body dies –sounds so romantic ,but only on paper.

Dharma in every age is so blood-thirsty.

I was cursed like many others, cursed by the conveniences of others ,conveniences  that others seek for themselves.

My mother slept in the middle of the lesson, not knowing that I will be forever stuck in a mortal-peril because of that. My mother who was so fond of me that she told that I can never be a warrior, thus provoking me to knowingly take the plunge in this death-well. My father went to fight another war in a faraway land to kill  an unknown challenger to feed his own ego and leaving me alone in the hands of those whom he thought were fighting a fair war. My uncles who promised me to stand with me when I breach the lotus. And why to talk about others and their conveniences? Even I chose this path for my own convenience – it was more convenient to die as a legend than to live as an unknown among the warriors of the times.

Oh, why I’m thinking like this ! It seems numbness is gradually crawling in all of my nerves. Or I’m feeling like a victim! It happens. Whenever we start considering ourselves as victims, everyone looks like a villain.

Do I regret ? No ! We should never regret about our past decisions as we all know that we often chose the best of the option available,with the best of the facts available with us, at that point of time.

Death must be like this ,with no regrets  of yesterday and no anxieties for tomorrow.–lying on the soft earth of a battle fought bravely , with the grasses playing with the hair on your head. It seems I’m a child again in a crib with moon, my original father, on the edge and my name hanging among the stars. Everything looks  so beautiful.

And I am not dead, I am in you , each one of you – you all are Abhimanyus-just like me-