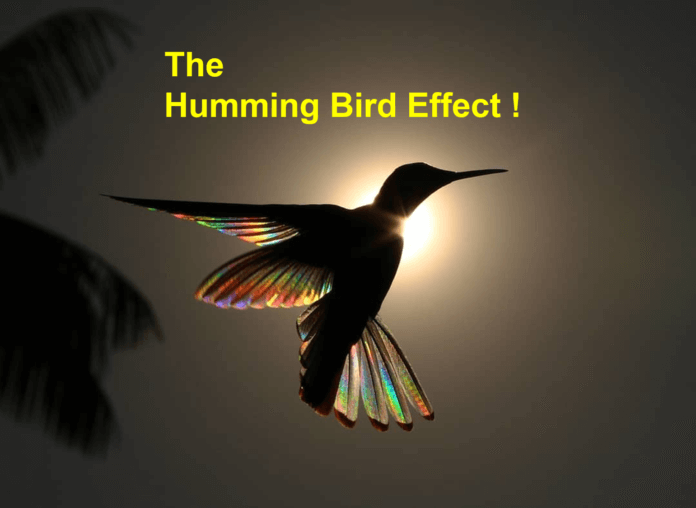 Have you heard about Butterfly Effect?

The butterfly effect is the idea that small things can have non-linear impacts on a complex system. It is imagined with a butterfly flapping its wings in one place and causing a typhoon at some distant location.

Of course, a single act like the butterfly flapping its wings cannot cause a typhoon. Small events can, however, serve as catalysts for something big to start.

A senior manager abusing one employee in a far-off location can have a long-lasting impact on an organization’s future if it blows up in today’s age of social media and fast communication. Similarly, a small incident of violence against a community in one part can lead to riots across the country.

Steven Johnson names it as Humming Bird effect in his excellent book named  How We Got to Now: Six Innovations That Made the Modern World.

In short, the Humming Bird effect can be defined as an effect of a small change or an innovation in one field that ends up triggering changes in different domains altogether.

Let’s go through a fascinating story. How the discovery of glass led to several other innovations and how you’re able to read this article because of that. This way you can also grasp the meaning Humming Bird effect more clearly.

The story of glass started in the desert around a few million years ago. The grains of sand—made up of silicon dioxide—melted under the heat, when cooled, could not get themselves back to their original shape, and left behind what we now recognize as glass.

Few people in Turkey ( old Constantine empire) discovered this and they mastered the art of glassmaking at their homes and started practicing it as their profession.

When Constantinople empire fell in 1204, a tiny group of glassmakers moved from Turkey to modern-day Italy and started practicing their trade-in Venice.

As history suggests, once the heat required to make glass almost burned down the whole city of Venice. These glassmakers were asked to leave the city and were banished to a small island named Murano. But the place was too small for the trade so they moved out and spread across Europe.

During the same period, in Germany, a goldsmith named Johannes Gutenberg was trying his hand in different businesses.

One of his many businesses was selling wine. During his visit to many vineries, he came across the screw press. Screw press was used for squeezing wine grapes. He did few experiments with the screw press and it led to the discovery of the printing press.

Gutenberg’s great breakthrough led to some new revelation: the revelation about the condition of “hyperopia”—farsightedness—a condition in which you can see far away things clearly but nearby things look blurry.

This problem was very much there among the common population, but most people didn’t notice that they suffered from it, because they didn’t read. So once the printing press came into existence and the books became available, for the first time, people got to know that they were farsighted.

And this revelation created an increase in demand for spectacles ( reading glasses). From the spectacle’s inception, people began to read. This increased the need for more glasses for all types of eyes, so people experimented with glasses and they started making several different types of lenses.

In 1590 in the Netherlands, a father and son duo, who were spectacle makers experimented with lining up two lenses, not side by side like reading-glasses, but in line with each other. They observed that with this they can magnify the image of the objects  This was the invention of the microscope.

This led to some other inventions. Robert Hooke, a British scientist used this microscope to identify that the cell was the basic unit of life. The same microscopes would later reveal the invisible colonies of bacteria and viruses that can sustain as well as threaten human life, which led to modern vaccines and antibiotics.

A Dutch eyeglass maker Hans Lippershey in 1608, invented a device that could magnify objects 3x. Later  Galileo modified it to reach 10x.

And, in January of 1610, just two years after Lippershey had filed for his patent, Galileo used the telescope to observe that moons were orbiting Jupiter.

We used transparent glass fibers and lasers to produce fiber optics, which led to the availability of the internet.

You being able to read this article is rooted in the discovery of glass and innovations thereafter.

Now think about life, how the same concept applies to life?

You giving positive feedback to a team member on Monday could mean that he comes in with just a bit more energy on Tuesday, talks to the customers in a more positive way and that’s the drop which makes the glass run over and wins over a big new deal for the company.

Or it could just mean that he’s in a better mood on the way home and compliments a stranger on the bus on his shoes. This puts the stranger in a better mood, which boosts his relationship at home!

‘I alone cannot change the world, but I can cast a stone across the waters to create many ripples.’- Mother Teresa