“My years at McKinsey gave me tremendous disrespect for large corporations.It seemed to me ,almost certainly,there were enormous inefficiencies.And the guys who climbed the ladder to the top had become specialists in climbing ladders and really lost touch with the business.” -John Malone ,The New Yorker, Feb 1994

The Peter Principle refers to a tendency observed in most of the organization hierarchy – it tells that every employee would rise in an organization through promotion until he reaches a level of incompetence i.e. he does not have the capability to perform in the new role and he would be stuck in that position permanently.

As a result , the world is filled with people who suck at their jobs -they’re incompetent in those positions, they will remain where they are and hence would be bit frustrated too. 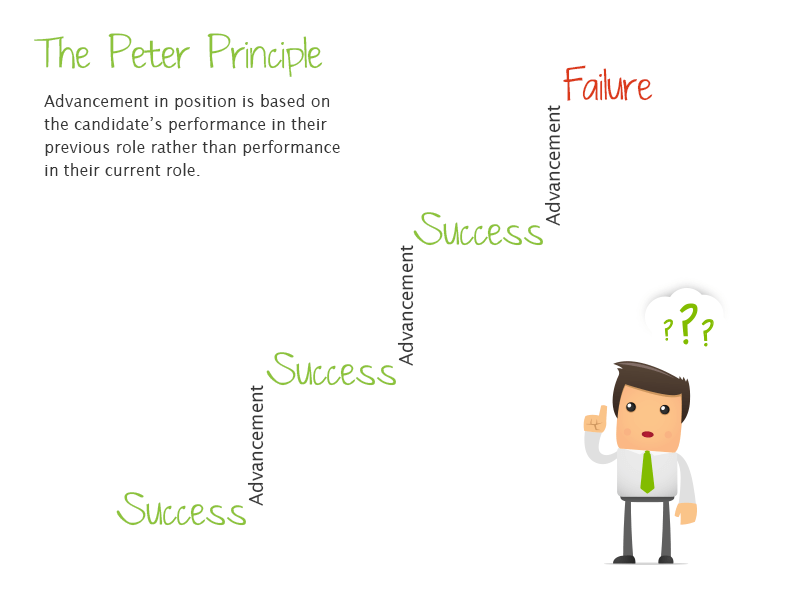 This can happen due to various reasons :

2. Many times people get promoted based on the number of years they spend in an organization (experience in years) rather than their performance and skill-set. Their long-duration-stay is taken as proof of their loyalty and as eligibility for the next role.

3. Many people are very good rule-followers, they are rated high as they never challenge senior management. And many times these guys are good at implementing a strategy provided by higher management. They are rated higher and this quality takes them to a higher position where they have to sometimes create new rules and strategies to navigate the company in a constantly changing environment. But whether a rule-follower can be good rule-creator, a good strategy -maker? Lack of this understanding results in getting a few non-competent getting in higher positions.

And above all, many of these people do not turn down a promotion, especially if it comes with higher status and pay,even if they know they are unfit for the position.