Recency Bias refers to a phenomenon where a person gives more emphasis on the events   that have happened recently, as compared to remembering something that may have occurred a while back or ignoring the holistic nature of how the world works .

When economy is doing good you think it’ll last forever. When we’re in a recession, you think we’ll never recover.

One example can be 9/11 event in USA.People stopped taking flights and preferred roads to travel to distant places. Although data suggests that chances of getting killed in a road-accident are higher than getting into a 9/11 kind of one sort of odd event.

In his book The Science of Fear, Daniel Gardner notes that if there were a 9/11 every day for an entire year, the odds that you’d be killed by terrorists are one in 7,750.

This recency bias affects our live almost every day in several aspects – one season goes bad and managers start predicting lower growth based on bad results of a bad year (opposite is also true), retail investors enter the stock-market when it is rising ,assuming that it would continue to go up. 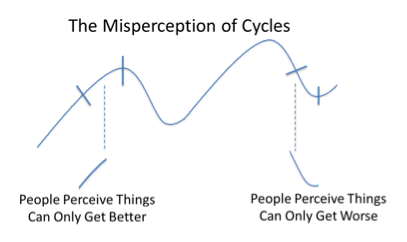 Many a times things happen in long time-cycles – real estate keeps going up in a decade and sometimes it becomes stagnant for a decade in a down-cycle. Many investors get stuck in a up-cycle while they completely ignore this asset-class in a down-cycle.

The problem happens when a person starts considering himself intelligent when he happens to ride an up-cycle while he tends to lose confidence when he enters into certain cycle during down-trend although it happens neither due to his intelligence nor due to his  stupidly.