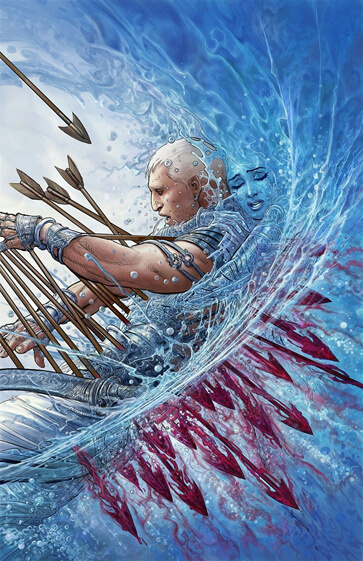 Your Traditions Can Be Your Trap !

“Oh God no”, Krishna could utter only these three words. He felt a shiver running down in his spine despite having the comfort and radiating warmth from the fire near him

It was late October, sometime late in the night, he could feel the chilly winds of uncertainty around him. Krishna had long ago lost track of the dates and it really didn’t matter. What mattered was this war, a directionless war that was not going here .Every day was like another and there were no nights to separate them as Krishna never slept any more.

The news from the spy was disturbing and unthinkable. Bhishma, the commander for enemy, granduncle of both Kaurvas and Pandvas, had taken a vow to kill all the Pandvas next day’s morning. It was difficult to fathom when he first got the news but when he went through the full account of what had transpired in Kaurva’s war-room few hour ago, he was left with no doubt.

The war between Pandvas and Kaurvas was going on since last 9 days. The war was the result of   a dynastic succession struggle between two groups of cousins, the Kaurvas and Pandvas. Krishna, a friend of both the sides, had tried to act as a mediator to avoid the war. But all his efforts proved futile in front of Duryodhana, the prince of Kaurvas.

Krishna had to take sides and he chose Pandvas as he somehow felt them to be on right side of dharma, righteousness but with a pledge to of not picking any weapon during the war. But it was difficult for few others to choose the group they would stand with.

Bhishma, for example, had a tough choice. He was a grand-uncle of cousins, but he was under oath that he will always protect the King of the times hence he had no option left but to fight on prince Duryodhana’s behalf. Bhishma was one of the most powerful warriors of his time, too powerful to be defeated by any warrior alive at that time.

Among Pandvas, Arjuna, one of the finest archer of his tomes, was the only one who could have given a good match to Bhishma. But Krishna found him as a hesitant warrior since the start of the war. Despite Krishna pursuing and mentoring him on the importance of the war, Arjuna was skeptical of killing of own relatives on the other side as well as reluctant to fight his granduncle.

Same feeling was reciprocated by Bhisma till date, he was the commander of Kaurva’s army from the start, but it seemed he was in love with Pandavas, From his war-strategy, it was obvious to all the analysts that he was fighting a mock-war, prolonging it so that both sides could see the futility of war, trying to negotiate a compromise every evening.

As per the spy, an angry and frustrated Duryodhana confronted Bhishma in the war-room, he held Bhishma responsible for few of Kaurvas men. Charges of nepotism and bias were hurled on him. Old man felt offended, his loyalty was being undermined and life-long image of being righteous was under a question-mark,

Angered by Duryodhana’s prodding, to avoid a blot of being a sellout and to save his legacy, he had shouted back,” I’m the one that would die for you, I’m the one who has always considered state’s interest over my own? You idiots want me to prove my loyalty? You want proof! I will give you the proof, come what may, I will kill all Pandavas tomorrow”.

Krishna sympathized with old man’s predicament – Bhishma, the poor guy, torn between love and loyalty, caught between duty and morality. But Krishna knew, he could not take chance. Pandavas lives need to be saved, it can’t be left to Bhishma’s inner turmoil.

There was a smirky grin on the face, a twinkle in his naughty blue eyes, Krishna was ready with a plan. Only challenge was to wake up Draupadi at this point of time. The poor lady, as fate would have it, was married to all five Pandavas brothers and was on fast for last many days, praying for her husbands safety.

It was 3 am. Bhishma normally woke up at 4 am every day for meditation, Krishna kept a close eye on everybody’s daily schedule. Draupadi needs to be ready, should dressed like a new bride, with all the jewelry, adorned with bangles producing the sweet tinkling sound.

Draupadi was more than ready when she was updated about Bhishma’s vow, Indian women have a history of fighting even death-gods if a husband life is in danger.

Krishna and Draupadi left for Bhishma’s tent at 3:45 am, no-one wanted to take any chance .All Pandvas were huddled up in Draupadi place, worried and anxious, so much depended on  whether Draupadi could keep her nerve under so much strain, a task that required an archer’s patience and a sage’s peace of mind.

Draupadi on the other hand was at peace, every muscle and nerve relaxed and her mind as quiet as her body. She had gone through much harder times before, and she knew that taking deep breathes renewed her strength.

According to plan, Krishna would peep inside to check whether Bhishma was up and meditating and he would give a signal to him by gently rubbing his hands together. Draupadi would go inside the Bhishma’s tent alone, and it was vital that Draupadi should enter Bhishma’s tent without making a sound. Krishna would wait outside and will move in if something unplanned happens.

They could see Bhisma’s tent clearly now, the light from lamp inside, was giving to warm gold color. It seems old man was already up. Krishna gently pressed Draupadi hand, it was an indication for her to stop and wait for Krishna’s cue.

Hardly few minutes had gone that she could see Krishna rubbing his hands and going towards back of the tent. Krishna saw her walking towards the tent.

What was this sound?

Any sound at this moment could jeopardize their whole plan, it may disturb Bhishma’s meditation and he may open his eyes!

Again the squeaky sound! It was coming closer! May be someone else was coming towards Bhisma’s tent. Krishna had knowingly taken this risk, this was a gamble, there was no plan B. Then he shrugged away the thought ,he knew that life sometimes don’t give you a second chance.

Krishna could not see anyone except Draupadi moving towards the tent, trying to look carefree, confident. Then he saw the sandals! Oh, Draupadi sandals were the perpetrator of those squeaks.

He ran towards her, bent down on his knees in front of her, Draupadi was taken by surprise, she was about to scream when Krishna pointed towards her sandals.

It took a minute for her to understand! She removed the sandals, Krishna picked them up and ran to hide again. Draupadi was about to call him back, it was very embarrassing for her, her sandals being carried by a man of Krishna’s stature.

Time was running out, she had to do what was more critical at that moment. She entered the tent, she could see the old man. Sitting in yogic posture, breathing in breathing out with eyes closed. As planned she draped her head and face with the loose end of her saree.

She bent down in front of Bhisma, deliberately making noise with her bangles as per Krishna’s direction. Bhishma didn’t open his eyes, with the sound of the bangles he could make out that it was some married lady, who had come to take her blessings.

“Deergha Sumangli Bhav, may you and your husbands live a long life”! Bhishma spoke in whispers, just like any other old man would say in this situation in India, blessing the younger women of community.

“Pitamah! You’ve put yourself in a labyrinth “, Krishna said with his usual smile on his face. His plan had succeeded, there was no use of waiting outside.

Bhima opened his eyes, recognizing Krishna’s voice. He saw smiling Krishna and a beaming Draupadi, who had by now uncovered her face.

One could see the shades of shock and dismay on Bhisma’s face. He had tangles himself in a maze, on one side he had taken a vow to kill Draupadi’s husbands and on the other hand he had just blessed Draupadi, promising a long life for her husbands.

“Pitamah, that’s the tricky issue for all living beings. They all live with in illusions, all are imagination-specialists, making an image of everything every time, ignoring the reality, and taking critical decisions of their lives under illusions that may be true or false!

And Krishna turned around, leading Draupadi out of the tent, leaving the old man fighting with his own illusions , a tactic which proved bigger than any strategy, a tactic to that made the traditions  a trap…………………