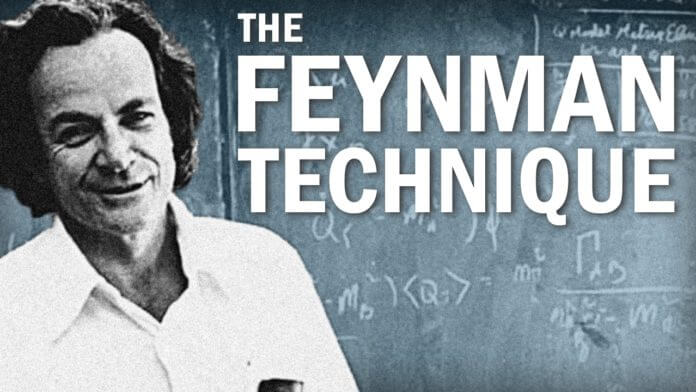 The Feynman Technique of Learning is attributed to Richard Feynman.

He was a Nobel prize-winning scientist and he was also known as “Great Explainer”.

Feynman Technique, also known as Feynman Mental-Model is known as a technique to help you learn pretty much understand anything – to understand concepts you always struggle to deal with, to remember stuff you have already learned, or to study more efficiently.

The Feynman Technique is explained very clearly in James Gleick’s 1993 biography, “Genius: The Life and Science of  Richard Feynman“.

This learning technique can be broken down into 4 simple steps:

Write the name of the concept at the top of a blank piece of paper. Keep adding to that page every time you learn something new about it.

“If you can’t explain it to a six year old, you don’t understand it yourself.”

Pretend you are teaching it to someone else (e.g a new student or a 10-12 years old kid).

Write down an explanation of the concept on the page keeping that young kid in mind.

Try to teach it to someone who does not know anything about that subject.

See if the other person is able to understand it.

See if you’re getting stuck somewhere during the explanation of that concept.

If yes, this pinpoints the gap in your knowledge of that specific concept, maybe you need to learn more.

Review the gaps in your own learning. Go back to the source material, re-read, and re-learn it.

Try again to simplify. Use some simple analogies and simple sentences  in explanation.

As they say, one good analogy is better than one hour of expalining a theory.

The following sentence, written by Feynman himself, exemplifies the power of this technique. What started as a question about our existence has been translated into a single sentence that can be understood by a  school student.

“All things are made of atoms — little particles that move around in perpetual motion, attracting each other when they are a little distance apart, but repelling upon being squeezed into one another.”

In short,Feynman says that if you know nothing about physics, the most essential scientific knowledge to understand is that everything is made up of atoms.

In one simple sentence, he conveys the foundational existence of our universe. It’s a master class not just for scientists, but for anything you want to learn or teach . Get to the hypothesis in as few words as possible.

This Feynman Technique of Learning is applicable in every field , is suitable for every person and can be useful for every individividual.

If you want to read more about Richard Feynman and few interesting insights from his life, please click on this link ‘ Lessons from Life of Richard Feynman’.