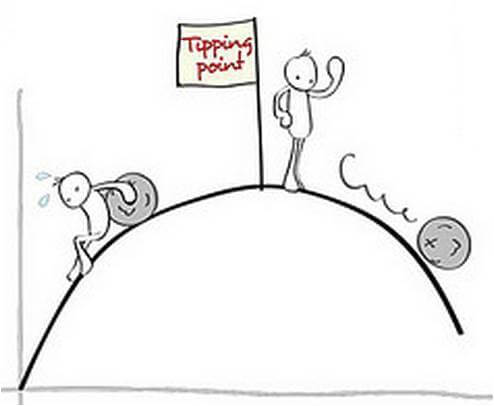 We all have experienced it – on several occasions some ideas, products, messages, and certain behaviors become very popular -suddenly and unexpectedly.

The famous author, Malcolm Gladwell, has tried to explain this phenomenon in one of his most popular books “The Tipping Point”

He tries to make this phenomenon understandable in terms of whether it is possible to start and control this kind of event?

The book tries to find out the reasons behind a few of the things topping the popularity charts or public-imagination in the recent past by citing a few examples.

And with-in this analysis, one can find several marketing lessons.

As per the book, there are 3 ways to understand social epidemic  :

i)The people who cause them

iii) The environment or context

Let’s look at this one by one.

i) The people who cause social epidemic:

You would always find 3 kinds of people in the background of every social epidemic.

All of us are connected to others through family, friendship, work, hobbies, etc. But some of us have more connections than others—these people are called “Connectors.”

Connectors have a large number of friends and acquaintances. When they hear a piece of information, which they feel is important, they’re likely to spread that information to a disproportionate number of people vs. someone who is not connected so well.

2nd type of person who’s important to social epidemics is a “Maven.”

Mavens are the people who love to accumulate knowledge. When they find an exciting new product, a Maven will tell other people about the product, explaining why it’s so good. If the Maven tells a Connector about his finding, then news of the product will reach many people, the message-chain begins and it helps the product to become a major trend.

The 3rd kind of person is a Salesman.

Salesmen are good at convincing other people to change their behavior. If a Salesman gets to know about a new trend, he is likely to persuade many of his friends to “get in on” the trend. 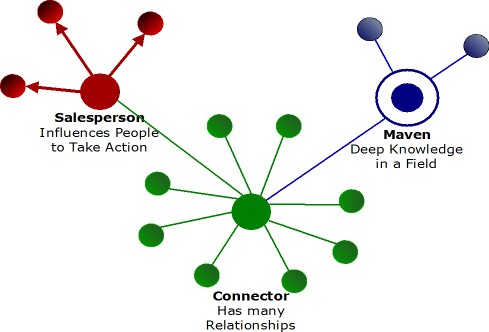 So when news of a trend passes from Mavens to Connectors to Salesmen, the trend has got everything – information from a wise (Maven), glue to the chain & connectivity ( from Connectors) and persuasiveness to persist (from Salesman), that allows the trend to reach its Tipping Point.

The 2nd law of social epidemics is the concept of “stickiness.”

People are important in disseminating information and spreading the word, but that’s not the only thing.

The idea, product, or message being spread must be at least somewhat intriguing, memorable, or addictive— something that might improve efficiency, improve something in people’s lives -daily actions or thoughts or many times it is entertaining.

Advertising agencies often spend millions to find out what is and isn’t “sticky” for consumers. Whether the product, idea, service or communication is sticky enough that people would stay with it for a certain minimum period and they would come back again to indulge with it.

iii) The environment or context

Human behavior is more often dictated by context—the physical environment in which humans live and move.

Our environments define what “acceptable behavior” means and this happens to shape our actual behaviors.

The spread of an epidemic depends on whether the context is right. Ideas and products that fit the existing context into which they are launched spread fast and wide, whilst others that don’t fit their context, don’t spread. The membership of communist groups in universities was higher during the days when being a communist as a concept was considered as a solution to all the ills of society but when the positive results from capitalism were there for everyone to see, there has been a clear decline in the popularity of the political organizations based on communist philosophy.