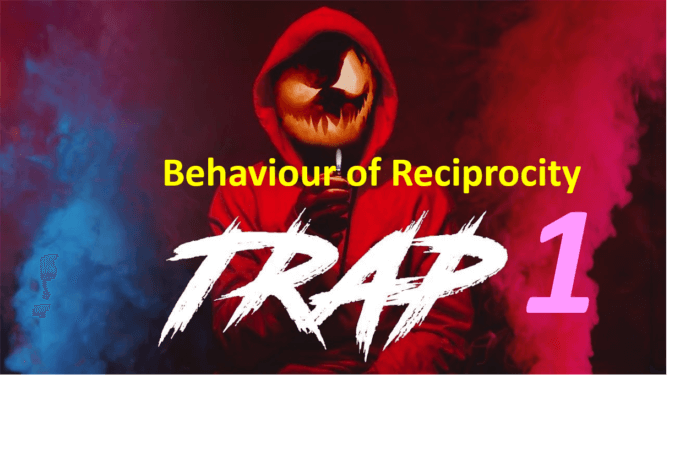 What You May Learn:

How organisations and individuals take benefit of our behaviour of reciprocity.

You may have heard or read about Hare Krishna Mission. They are more prominent and most active is USA. But have you ever thought how they run their organisation, from where they get the funds.

Maintaining & building large number of temples, providing free food to the underprivileged people – this all requires money. But do you know from where this money comes from?

Well, maybe you guessed it –the money comes from donation. Many of the followers HK Mission can be seen asking for donation in several public places.

But there is some uniqueness in the way they go out asking for donation. Here is little background to it.

In the late 1960s the mission was really struggling financially; it was quite new and strange religion to many Americans, so it was hard for the mission to raise money.

But then they found a solution. 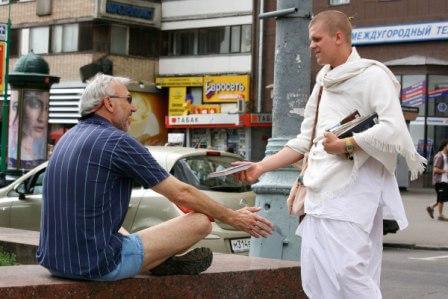 In airports (and other public places), they would simply give the passerbys : a flower, a book or a magazine – what they described as a gift

Then, after the person had the free gift in his or her hand, they would ask for a small donation.

People felt obliged, many of them didn’t feel happy but still their hands still reached into a pocket or a purse, come up with a dollar or two for donation. For years, the Hare Krishna Mission (HKM) raised millions of dollars this way.

How giving a flower or a magazine or a small gift resulted in people responding better as far as donation amount was concerned?

Well, it is same as someone passes you in the hall and smiles at you, you feel compelled to return their greeting. When you don’t, you notice it, it makes you uncomfortable.

This is known as the behaviour of reciprocation. As a human we’re are obligated to give back to others, the form of behavior that they have first given to us.

The people at Hare Krishna used this rule, this behaviors of humans as a persuasive technique to improve their financial condition.

Let’s look at one more example.

In many countries, if you visit retail shops they would offer you some tea, coffee or cold-drink as soon as you enter the premises.

They all offer a reward to their potential customers before they even make a purchase.

“Why they should give away something for free?”

They’re in reality, trying to tap into a black-hole of human behavior. The black hole of feeling indebted .

When you offer something first for free, if it’s helpful, people feel a real sense of indebtedness towards you. And they try to reciprocate.

When business owners offer a small gift for free to their potential customers, they were basically creating a social obligation for them to return the favour, to reciprocate.

People will be nice if you’re nice to them.

One may argue that being nice to someone who is nice to you is good ! Why we’re naming it as a black-hole.

By offering small gifts, the giver‘s intention is get multiple time returns. By offering you a tea, the shop-keeper is trying to make sure that you would not leave the shop empty –handed, you would buy at least something and you may negotiate less on price.

In HKM example, we found that by giving a flower, HKM volunteers got donation in dollars, the amount which was higher than the price of a flower.

Why Humans have this black-hole?

It is because people will feel indebted, which makes them more likely to have positive response to your future requests.

It’s also because as people, we’re deeply wired to be reciprocal.

This is also probably because there are some very obvious benefits for everyone with the rule of reciprocation; it’s one of those rules that likely made it easier for us to survive as a species.

Therefore, if you do something first, by giving them something or doing something nice for them, it is more likely to come back to you.

How marketers (and you can) use this black hole ?

There are 3 factors if someone wants to use this ABP in a more effective manner:

Here size of the favour or the offer doesn’t matter.

Something as small as giving a flower has been shown to influence people well beyond its monetary value.

That’s why when followers of Hare Krishna offered a flower whomsoever they met – people were more magnanimous when they are asked for a donation.

How to resist this black hole?

If you want to resist this then you need to refuse the initial favor or gift. Once you accept, it becomes harder to stay outside the influence.

You can learn about different traps of human behaviour by clicking on any of the following:

-Trap 1- based on principle of reciprocity (you’re here)

-Trap 4 -based on  the principle of social-proof

-Trap 6 -based on the principle of commitment