Home Beyond Mythology Doing your job Vs. Doing something with a purpose!
Tell Others
Facebook
WhatsApp
Linkedin
Email
ReddIt 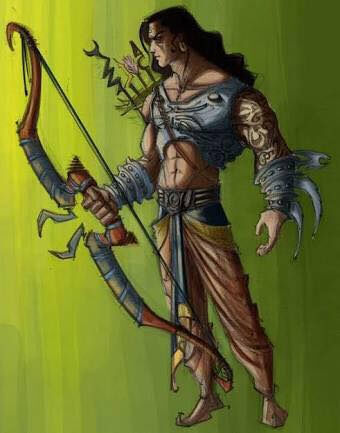 Arjuna once asked Krishna, “Lord, why do people consider Karna more generous than Yudhistara? Neither have ever refused whatever has been asked for nor whoever has asked. So why is Karna considered greater than Yudhistara?”

The Lord said with a smile, “Come, I’ll show you why.”

Disguised as brahmins, they first went to Yudhishtira’s court and asked for sandalwood sticks to conduct ‘YAGNA’.

The king immediately sent his soldiers to all parts of his Kingdom in search of sandalwood sticks.
It was monsoon,the trees were all drenched and the soldiers returned with wet sandalwood pieces.Yagna was not possible with the wet sticks.

Krishna and Arjuna then proceeded to Karna’s court next and asked for the same sticks. Karna thought for a whileand said “as it’s raining for several days now, it will be impossible to collect dry sandalwood sticks. But there is a way. Please wait for a while.”

Saying this, Karna proceeded to chop and cut down the doors and windows of the court which weremade of sandalwood and after making them into pieces, gifted the dry sandalwood sticks to the brahmins to conduct ‘YAGNA’.

They accepted the offerings and went back.

On their way back, Krishna asked Arjuna, “Do you realize the difference between the two, Arjuna? Had we asked Yudhishtira to give his doors and windows for us to conduct yagna, he would have given us without a second thought. But he did not thinkof it himself.We did not ask Karna either. Yudhishtira tried to give because he considered giving as part of his job and duty .

Karna went out of the way because he loved giving and went beyond surface level thinking about where only giving would serve the objective or there’s something else can be done to meet the real purpose !